The Bologna Botanic Garden or Orto Botanico (like everything, it sounds better in Italian) has been a centre for botanical research since the 16th century when the University of Bologna was one of the main centres of botanical research.

It’s not big, just over two hectares, and a slope at the end is formed by the city walls. However, despite its relaxed feeling… 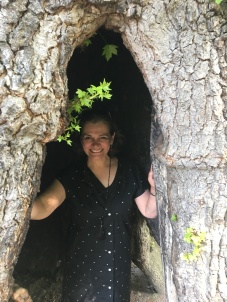 …and both tourists and locals obviously using it for relaxation (even if not on the flower pot benches), it retains its educational focus.

Even the carnivorous plants (excitingly caged in) were being studied by someone with a clipboard when we visited. He didn’t get eaten.

So it felt appropriate, and curiously beautiful, to suddenly come across these two women in white coats gathering specimens from the garden.

Here’s a poem for them…

Scientists in the Garden of Love

There needs to be proper proof:
to dismiss first of all the negatives,

to protect her young, that baby laughing
up at her needs her affection, their smiles

are pure self-interest; the group of teenagers,
– a boy at the centre, standing on a log,

and at the edge, another boy laughing
at a joke only those two will find funny –

it’s hormonal. Even the middle aged couple
reading on the bench, his hand raised

to stroke her hair, are both just facing
their fears of getting older. Move on,

because at last here is our evidence:
those two kissing, see where

they have placed themselves
right by the carnivorous plants?

Yes, their love is not just about growing,
but in how much they have to lose.

NB The garden is also home to the world famous Herbarium. This holds 100,000 botanical specimens dating from the 16th century onwards. A true treasure trove. You need to make an appointment to visit the Herbarium, although the gardens are open and free. More details here.